Vital Eyes Complete contains virtually every well-researched eye nutrient to protect the retina and also the lens in high doses, and it also doubles as a fine multivitamin and mineral formula. This formula features an excellent dose of 18,000 IU of mixed natural carotenes, including alpha and beta-carotenes as they exist in Nature, with 20mg. of lutein and 10mg. of zeaxanthin. Natural carotenes are proven to be more effective for preventing macular degeneration and improving macular pigment density and visual acuity than isolated beta-carotene. The famous AREDS trial used only beta-carotene, which was less effective and actually displaces lutein consumed in the diet. Vital Eyes Complete includes a high dose of 60mg. of zinc, balanced with the correct amount of copper to protect blood cells; found in long-term trials to reduce macular degeneration development by 25% over six years. It has taurine, vitamin C, and CoEnzyme Q10 which are classic lens protectors to slow cataract progression. Lipoic acid is an antioxidant specifically for the nervous system including the retina which originates in the embryo from brain tissue. Vitamin E and selenium add further antioxidant protection, and vitamin D3 is a known brain and nerve cell nutrient. The bilberry in Vital Eyes Complete is standardized to 25% anthocyanosides and generously protects both the retina and lens against oxidative damage to reduce the risk of macular degeneration and also cataract. We have numerous patients who have been delighted to have stable or improved eye exams over years on this formula after a diagnosis of macular degeneration or cataract, or who have a family history or high risk of eye disorders and take it for long-term protection.

Lutein is one of a group of naturally-occurring carotenes found in dark green, yellow and orange vegetables including broccoli, spinach, kale, orange pepper, yam, sweet potato, squash, apricots and kiwi fruit. Lutein also occurs as a color pigment in the human eye, where in the macula and retina it appears to act as a light filter, protecting the eye tissues from sun damage and radiation. Lutein and zeaxanthin spare the retina from oxidative damage and scavenge dangerous free radicals, to reduce oxidative stress and eye cell damage. Along with other antioxidants including vitamin C and selenium, lutein, zeaxanthin and mixed carotenes decrease harmful lipid peroxides, improve protective glutathione levels, and boost superoxide dismutase and catalase enzyme action in retina cells. Lutein is best absorbed when taken with a meal rich in fats or oils.

Taurine is an amino sulfonic acid, a protein building block, found primarily in the retina, brain, heart, and platelets. It is a classic natural remedy for protecting the lens of the eye, as well as being a heart tonic that can regulate heartbeat and stabilize cardiac cell membranes, and improve the symptoms of heart failure including weakness, fatigue and shortness of breath. In the lens of the eye, taurine protects the fibers against oxidative damage and the disarray which causes cataracts, and boosts glutathione. Diabetic people have the risk of high polyols accumulating in the lens and causing blindness: taurine has been shown to reduce glucose-induced injury. In the retina, the high concentrations of taurine decline with age, risking vision problems including retinal ganglion cell degeneration, and retinal dysfunction in children. Taurine can restore nerve growth factor which is required for retinal health, and protect light-sensing cells from sunlight or oxidative damage.

Lipoic acid occurs in the mitochondria of all tissues where it is a vital cofactor for cellular energy production from ATP. It is a sulfur-rich vitamin-like molecule that is sometimes called nature's perfect antioxidant: Antioxidants are substances that render free radicals harmless and halt the formation of new free radicals. Lipoic acid is a compact molecule that easily crosses cell membranes. It has unusually broad-ranging actions against both water-soluble and fat-soluble free radicals, both inside cells and in the supportive tissues outside. There is evidence that it either helps recycle vitamins C and E, or that it actually substitutes for their antioxidant actions. Lipoic acid is the only antioxidant that can regenerate glutathione in the body, and it is a key nutrient for safeguarding mitochondria from damage. As they generate energy, mitochondria naturally produce oxidants as by-products; without adequate antioxidants to clear these, mitochondria decay faster with age, leading to more rapid cellular decline. Lipoic acid is as a nerve protector for the brain, for the retina which derives from brain nerve tissue, for other special senses including hearing, and for diabetes and neuropathy. It may also have anti-aging benefits. Lipoic acid protects the retina from damage due to free radicals or unstable oxygen, and thus reduces the risk of macular degeneration progression. Because it naturally occurs in the human body and unlike other antioxidants is widely distributed in both watery and fatty tissues, lipoic acid can penetrate all areas of the eye, membranes and cells. Lipoic acid counteracts peroxidation injury to lipids in eye cell membranes. Eye proteins may also be shielded from glycosylation, where excess sugar attaches to them, and lipoic acid can induce natural antioxidative defenses in the lens of the eye.

Bilberry enhances the recovery of the visual pigment rhodopsin, and protects the retina from free radical damage. It can lower intraocular pressure for glaucoma with improvements in Humphrey Visual Field, probably slow cataract formation, and improve ocular blood flow. Bilberry eases eye strain with blurred vision, and for dry form age-related macular degeneration it may help visual acuity and visual field. Bilberry has traditionally been used for night vision since World War II, when British pilots in the Royal Air Force ate bilberry jam before night flights. Bilberry contains anthocyanosides which are derivatives of anthocyanins, the blue, red, or violet pigments found in dark berries that have protective antioxidant actions like flavonoids and can scavenge free radicals. In human research, dietary consumption of bilberry daily for eight weeks increased the plasma level of various polyphenols compared to placebo, including p-coumaric acid, protocatechuic acid, homovanillic acid, vanillic acid, 3-hydroxyphenylacetic acid, and 3-hydroxyphenyl propionic acid. Studies with in vitro cultured human retinal pigment cells found that the anthocyanins and other phenolics from bilberry up-regulated oxidative stress defense enzymes such as heme-oxygenase-1 and glutathione S-transferase-p. This suggests that bilberry helps signal pathways that influence genes controlled by the antioxidant response element. Cataracts and macular degeneration remain the major cause of blindness and loss of visual acuity in the elderly. Both disorders have been attributed to damage by free radicals. Bilberry’s flavonoids are known as potent antioxidants, scavenging free radicals and used for multiple age-related ocular disorders. Rats with early senile cataract and macular degeneration were given control diets or supplemented with 25% bilberry extract. The testing at 3 months showed that more than 70% of control rats had cataract and macular degeneration while for the test group bilberry extract completely prevented impairments in the lenses and retina. Bilberry antioxidants decreased lipid peroxides in the retina and serum of the rats. The results suggest that long-term supplementation is effective in prevention of macular degeneration and cataract.

Always take natural remedies under the supervision of your health care provider. Consult your physician before using Vital Eyes Complete' if you take medications for diabetes or high blood sugar, including insulin, metformin, glyburide, pioglitazone (Actos), and others. Both bilberry and lipoic acid can reduce blood glucose and improve insulin sensitivity, so if you take hypoglycemic drugs monitor your blood glucose levels closely as your dose requirements may change. Check your blood glucose regularly if you have high blood sugar and take Vital Eyes Complete' along with natural remedies that may lower blood sugar including chromium, vanadium, gymnema sylvestra, capsella, cinnulin, banaba, Metabolic X', fenugreek or garlic. Do not use Vital Eyes Complete' without the advice of your healthcare professional if you take lithium, astaurine might have a diuretic effect and decrease lithium clearance, which might increase lithium levels so that the dose may need to be changed. Do not use Vital Eyes Complete' during pregnancy or nursing without the guidance of your physician, as there is insufficient data on safety during pregnancy. 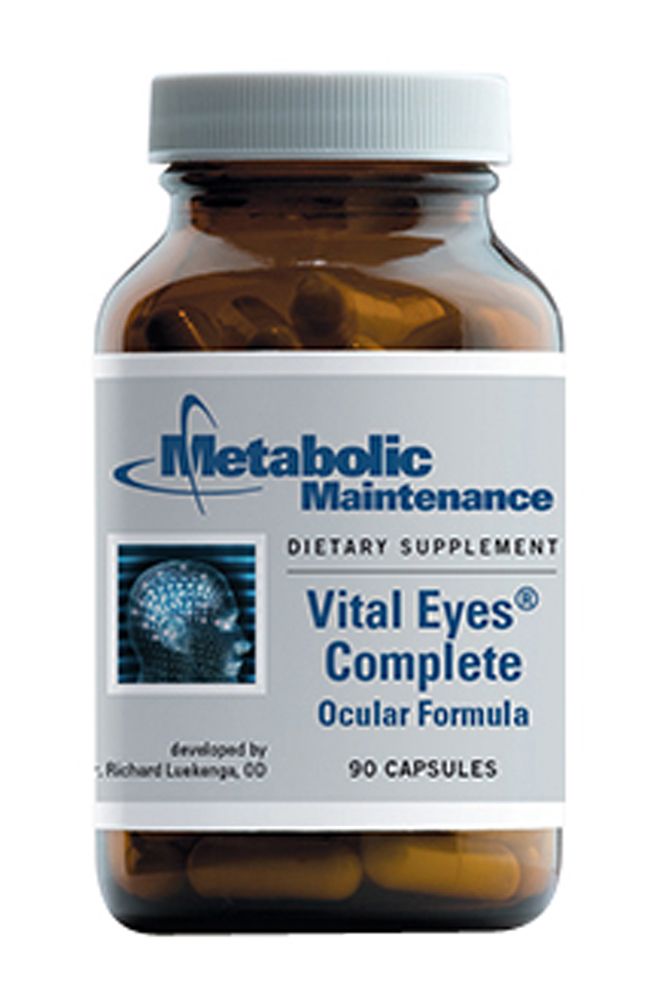 $56.00
Brand:
Metabolic Maintenance
Shipping:
Free shipping for purchases of $40 and over