In our experience Red Clover Extract Plus is a key botanical for women's health and skin disorders. It has provided enduring benefits for our patients that can build over time. This formula has a particularly high dose of red clover concentrate in a stable form, amplified by the additional presence of the whole herb. Including the whole flower provides minor constituents, minerals, and active compounds that naturally occur in the red clover plant, all of which work together giving red clover a long track record in traditional herbal medicine, to go along with the scientifically studied standardized isoflavone extract. Red Clover Extract Plus contains all the major isoflavone flavonoid glycosides on which most red clover research has been conducted: diadzein, formononetin, genistein and biochanin. It also includes coumestans, coumestrol, and volatile oils including methyl salicylate, all of which contribute to its potency. The pure capsulation without fillers and binders contributes to the excellent and even absorption we look for.

Red clover flower tops have a long tradition of use in botanical medicine, as an alterative, a traditional herbal medicine term. Alteratives are classically considered to be 'blood cleansers and purifiers' that support efficient elimination of waste by promoting lymphatic flow and the liver's detoxifying functions, as well as assimilation and utilization of nutrients. Some alterative herbs are seen as primarily lymphatic tonics, such as cleavers, chaparral and baptisia, others have more influence on liver function including yellow dock and burdock; yet others affect the skin, kidneys, and lungs: red clover and sarsaparilla. Red clover's benefits for skin may be due to its alterative properties, and its constituents biochanin-A, caffeic acid, chlorogenic acid, coumarin, genistein and isorhamnetin which all show possible immune boosting actions in studies. Red clover, a legume in the pea family, was listed in 1898 in King's American Dispensatory, the bible of eclectic physicians. By 1890 Parke-Davis, now a subsidiary of Pfizer, marketed Syrup Trifolium, containing red clover, burdock, poke root and Oregon grape, as a blood purifier. Red clover later became the base for the Hoxsey Formula.

For eczema, red clover can encourage healthy skin development and decrease redness, itching, flaking and cracking. Eczema patients often have high levels of IgE, an allergy antibody, which red clover may help to normalize. It also appears to be helpful for skin immunity: people with eczema have reduced ability to kill skin bacteria, plus abundance of staph aureus on their skin, and increased susceptibility to infection. With eczema there is also a genetic defect for making a skin protein called filaggrin, which maintains skin integrity and moisture content: red clover may nourish skin quality by its alterative actions.

Red clover is one of a classic set of alterative botanicals used for psoriasis, including sarsaparilla and burdock, all of which may work by improving digestive and liver functions, ultimately reducing the number and size of skin plaques. Psoriasis is strongly linked with excessive gut permeability, also with celiac and Crohn's diseases, and impaired liver function. The intestinal lining of psoriasis patients has shown microscopic damage and increased permeability or leakiness. Antigens from microbes and food then cross into the blood stream. There is evidence that endotoxins, fragments of gram-negative gut bacteria, occur at high levels in the blood of psoriasis patients, and trigger abnormal skin cell overgrowth. Red clover and sarsaparilla may bind endotoxins and promote their safe excretion. Several studies since the 1940s have found that these herbs help up to 80% of patients, especially those with chronic, large-plaque psoriasis. Red clover's action as a liver tonic adds to its value for psoriasis: one key liver action is filtering and detoxifying blood coming in from the gut through the portal vein. Altered liver function is common with psoriasis, and can lead to higher levels of microbial toxins entering the blood and aggravating skin overgrowth and plaque formation.

For menopausal symptoms, red clover has frequently been documented to be helpful early in the menopause process. Its isoflavones, including diadzein and genistein, can bind to estrogen receptors to stabilize the body's own hormone output or to 'fool' the receptors that more estrogen is present than there actually is. Vasomotor symptoms including hot flashes and night sweats improve, and vaginal dryness may subside. Since the 1990s, clinical trials have shown up to 75% reduction in hot flashes over four months, versus 30% drop for the placebo group. Some inconsistent study results may be due to the participants' stage of menopause: botanicals work to support the body's natural estrogen levels, and can only do so while there are estrogen reserves to encourage. For women who are many years beyond having periods, botanicals may not be quite as effective. More recent studies have documented 58 to 70% reduction in the number of hot flashes, plus a 47% average decrease in their severity. Red clover did not have an estrogenic effect on the lining of the uterus, which did not become thicker than controls. Isoflavones have a greater affinity for beta-estrogen receptors in the vasculature, brain, bones and heart, rather than alpha receptors in the uterus, breasts and ovaries.

There also appear to be extra cardiovascular benefits for red clover: A clinical trial using 80mg. of red clover isoflavones, which is two capsules daily, found that postmenopausal women gained a 23% increase in elasticity of their arteries. This would cut the risk of high blood pressure caused by arterial wall stiffness, and reduce the risk of heart disease, which is the number one killer for women. There is also evidence that red clover isoflavones raise good HDL by as much as 18% after three to six months of use, and may reduce bad LDL. In addition, research suggests that taking red clover daily for six months may increase bone mineral density for postmenopausal women. 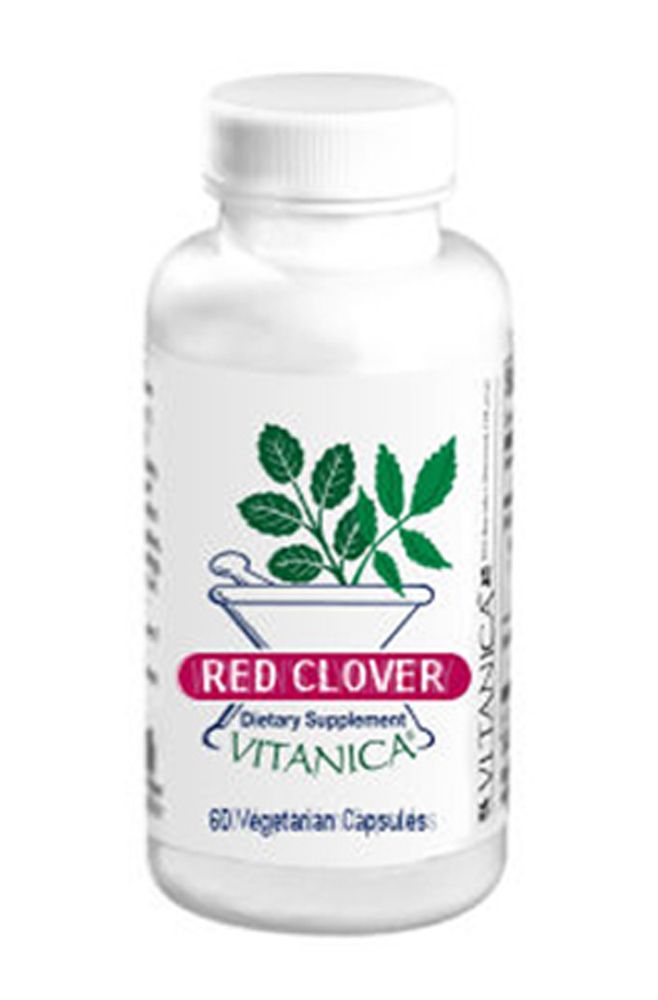 $20.00
Brand:
Vitanica
Shipping:
Free shipping for purchases of $40 and over