Niasafe contains a special form of niacin, inositol hexaniacinate, which is particularly safe and more effective than raw niacin, and thus allows for higher doses. For cardiovascular health, amounts of up to 1,200mg daily are required. This potent formula requires fewer capsules and is safer and more economical than plain low-dose niacin, and it works better for cholesterol and circulation. Inositol hexaniacinate, which has been the favored form of niacin in Europe since the 1970s, is the only form of niacin that helps peripheral vascular disorders including Raynaud's. We have also found Niasafe to have gentle blood-pressure lowering effects, and to help chronic acne.

It consists of six molecules of niacin in its nicotinic acid form joined with one molecule of inositol, a minor member of the B-vitamin family. We especially like that inositol is a liver tonic and has its own independent health benefits. Unlike raw niacin which has been linked with gastric upset, impaired sugar metabolism, injury to liver cells and raised liver enzymes, inositol hexaniacinate is protective for the liver. We test liver enzymes every three or four months for patients with high lipids, and in years of using Niasafe we have not seen it linked with abnormal liver enzymes yet.

Even better, inositol hexaniacinate does not have the side effect of skin flushing and itching that plain niacin causes even at low doses. The FDA approves prescription-strength niacin, but because of its side effects it is hard to reach a therapeutic dose of over 500mg. with this raw niacin, necessary to improve cholesterol levels and ratios. Sustained-release niacin is yet more risky, with its notoriously high rate of liver damage. By contrast, just two capsules of Niasafe daily, containing a highly potent 600mg. each, are usually ample and safe.

For its lipid-lowering effects, it is best taken in the evening with dinner as most cholesterol is made in the body overnight. Pharmacokinetic studies show that the inositol hexaniacinate molecule is absorbed intact and slowly disassembled in the bloodstream, gently releasing niacin and inositol. Maximum serum levels are reached after around ten hours; this delayed release further reduces the risk of flushing and impact on the liver.

About niacin and inositol

Niacin, in the inositol hexaniacinate form, has been documented to improve cholesterol since the 1950s. Now we know that niacin specifically lowers bad LDL, triglyceride, lipoprotein (a), and fibrinogen level and the inflammatory marker C-reactive protein, while raising good HDL. This is very helpful: current theory suggests that it is inflammation that damages the walls of arteries (but not veins), and the body applies cholesterol-based, cement-like plaque to repair the damaged patches. Over time, with ongoing inflammation and more repairs, the patches become thicker and harder, eventually narrowing the arteries. Statins appear to cut inflammation mediators like cytokines. In the well-known Coronary Drug Project that concluded in 1974, niacin was the only agent found to reduce long-term mortality. Today niacin is still the most effective FDA-approved means of raising good HDL cholesterol. More recent studies comparing lovastatin and niacin, found that niacin could raise HDL by 30-33% after six months and reduce lipoprotein (a) by 35% where lovastatin did little or nothing for these levels. Other research comparing atorvastatin (Lipitor) found that niacin was more effective at increasing LDL particle size, which can then lower heart disease risk, and at boosting HDL2, a specific subtype of HDL that brings particular protective benefits. There is also evidence that niacin combats atherosclerosis by increasing large-particle lipids and cutting phospholipase A2.

For raised lipoprotein (a), niacin at a dose of 1,500-2,000mg daily is the single most effective remedy. Lipoprotein (a) is a fat-protein complex in plasma, a variation of 'bad' LDL cholesterol that is even more damaging. It has a very similar structure to bad LDL, but with an extra molecule of a sticky protein called apolipoprotein (a). This makes lipoprotein (a) much more likely to adhere to artery linings. Research shows that a high lipoprotein (a) score carries up to a tenfold higher risk of fatty deposits in arteries and heart disease than just raised LDL, as LDL alone is less sticky without the additional apolipoprotein (a). Elevated lipoprotein (a) levels are an independent risk factor for heart disease: levels below 20 mg/dL are associated with low heart disease risk; 20-40 brings moderate risk; and above 40 is high risk. Lipoprotein (a) may further contribute to cardiovascular disease by attracting substances that increase inflammation, such as interleukins (IL-1, IL-6, TNF-alpha) and prostaglandins (PG2), leading to the buildup of fatty deposits.

Niacin can help peripheral vascular disorders including Raynaud's because it enhances blood flow. There is good scientific evidence that it can reduce Raynaud's episodes, and lessen painful claudication leg cramps in vascular disease. Only the inositol hexaniacinate form is helpful for Raynaud's and PVD, not regular niacin. Double-blind studies have confirmed the effectiveness of inositol hexaniacinate for counteracting the blood vessel constriction to hands and feet in Raynaud's, and easing painful leg cramps from reduced blood supply to calf muscles during walking that occurs with intermittent claudication.

For acne, inositol hexaniacinate may open small blood vessels and improve skin circulation. It can significantly reduce acne outbreaks and speed the healing of pimples. Several of our patients have had good long term results with Niasafe. It is effective without any need for skin flushing or irritation. A dose of 600-1,200mg. daily is usually effective.

Other Ingredients: Hypromellose (derived from cellulose) capsule, Leucine, Silicon Dioxide. *Does not cause flushing in many patients.

Always take natural remedies under the supervision of your health care provider. Do not use 'Niasafe' without the advice of your healthcare professional if you have diabetes or are taking medicines to lower blood sugar, as even inositol hexaniacinate may occasionally impair glucose tolerance and lead to the need for higher medication doses: monitor blood sugar levels carefully. Inositol hexaniacinate can potentiate the cholesterol-lowering effects of stains drugs, possibly requiring lowered doses, so lipid levels should be carefully monitored. Do not use 'Niasafe' during pregnancy or nursing unless under the guidance of your physician, as there is insufficient data about safety during pregnancy. 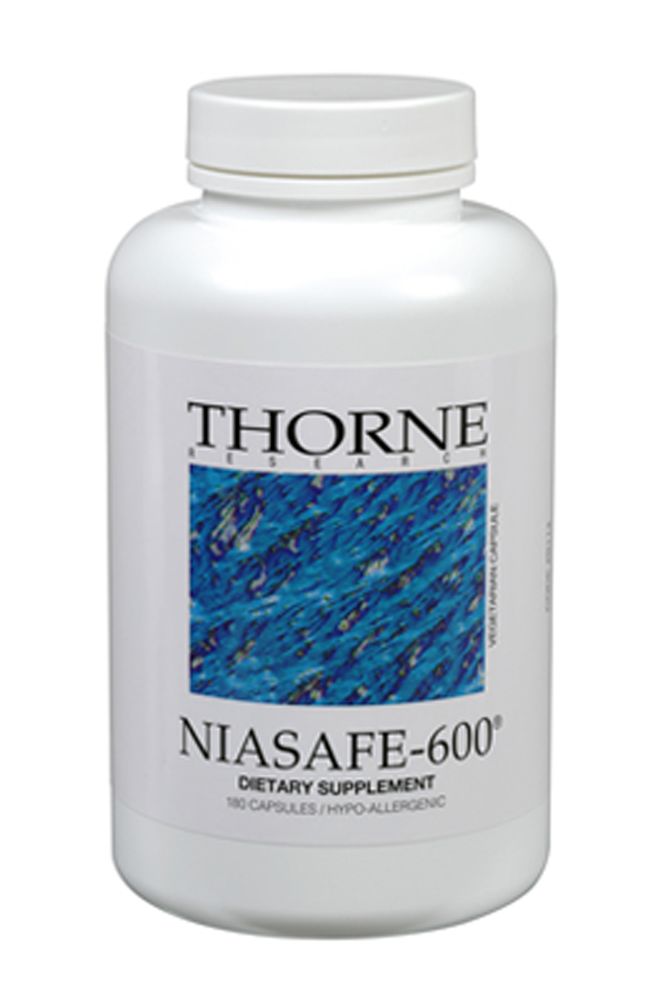 $55.00
Brand:
Thorne
Shipping:
Free shipping for purchases of $40 and over