Metabolic X combines several of the most effective and well-proven blood-sugar balancing nutrients and herbs, which have been studied successfully over years. Our patients receive consistently excellent results for improving mildly elevated blood sugar or for control of type 2 diabetes, with enduring improvements in fasting glucose and hemoglobin A1C over months and years. Metabolic X has a generous dose of chromium, 500mcg, in an absorbable chelate form, and vanadium as the biologically active vanadyl sulphate. Gymnema is a classic blood sugar balancing botanical with a long track record of use. The addition of banaba and the cinnamon extract cinnulin in the ample dose of 250mcg, standardized to the optimal concentration of 3% polymers, magnify the benefits of chromium. Both gymnema and banaba are standardized, to 25% gymnemic acids and 1% corosolic acid respectively, so that we know they deliver reliable amounts of the active constituents. Our patients like the convenience and economy of having high-potency blood sugar remedies all in one bottle.

Chromium has featured in numerous studies with patients with type 2 diabetes, and is shown to decrease fasting glucose levels, improve glucose tolerance and insulin sensitivity, and lower insulin levels. It can also reduce total cholesterol and triglycerides and boost 'good' HDL, all of which can be impaired with diabetes, partly via improving insulin activity. Chromium is an essential nutrient for human life and is widely distributed in small quantities in foods; however, the refining of flour and sugar has depleted chromium levels in many diets. Metabolic stress and strenuous exercise can increase chromium needs if blood glucose rises. Chromium deficiency is common in type 2 diabetes.

Chromium is popular in weight-reduction programs, it stimulates thermogenesis (fat-burning) and stabilizes blood sugar. It can improve lean body mass by moderating fat deposition, helping amino acids enter into muscle tissue, and shrinking fat stores. Over ten weeks, chromium was found to facilitate the loss of 4.2 pounds of pure fat, and even more impressively lead to an average gain of 1.4 pounds of muscle, which is a fat-burning tissue.

For acne, studies of skin biopsies have found that glucose tolerance may be impaired in the skin, even with normal blood glucose. Acne has been called skin diabetes. Dermatologists have had success healing acne by giving insulin either systemically or even into the skin. There are preliminary findings that chromium along with sugar-balancing gymnema, vanadium and banaba may bring rapid improvements for patients with acne.

Gymnema is a plant from India's tropical forests, with a long history of use for diabetes. Recent scientific investigation confirms gymnema can help stabilize blood sugar in both type 1 and type 2 diabetes. Gymnema may support regeneration of beta-cells in the pancreas that make insulin, increasing the number of pancreatic ?-cells and improving their function to help the body make more insulin. Clinical observation shows that gymnema can help reduce sugar cravings to help patients more easily enjoy a low-carbohydrate diet.

Gymnema may also interact with insulinotropic enteric hormones so that more insulin is released. Human evidence suggests that gymnema may be efficacious as an adjunct to conventional drug therapy for type 1 and type 2 diabetes. It appears to enhance the action of insulin in type 1 diabetes, increasing glucose utilization, improving blood sugar control, sometimes allowing patients to reduce their insulin doses. For type 2 diabetes in clinical studies gymnema led to reduced doses of oral hypoglycemic drugs because of better blood sugar balance. With sustained long-term use gymnema appears to lower serum glucose and glycosylated hemoglobin (HbA1c) levels. Gymnema has also been reported to restore levels of glycoproteins in diabetics to normal. It may prevent diabetic micro-angiopathy, impairment and narrowing of small blood vessels, that leads to poor blood flow and damage to eyes, kidneys and heart. There is also early evidence that gymnema can help lower total cholesterol and triglyceride levels.

Vanadium is a mineral that can improve or mimic insulin's effect on cells. Research shows that vanadium can improve glycemic control by enhancing glucose transport into cells, and by improving glycogen and lipid synthesis to reduce glucose and fats in the blood. Vanadium inhibits gluconeogenesis and lipolysis, so that less glucose is made and less fat broken down into the blood stream. Vanadium may work through activation of several key components of insulin-signaling pathways that include the mitogen-activated-protein kinases, extracellular signal-regulated kinase, and phosphatidylinositol 3-kinase and protein kinase B, leading to enhanced phosphorylation of glycogen synthase kinase-3. Vanadium compounds may also modulate insulin metabolic effects by inhibiting protein tyrosine phosphatase (PTP). According to review data, vanadium doses of 500mcg or more may stimulate glucose oxidation and glycogen synthesis in the liver in humans.

Cinnulin is an ultra-potent water-soluble cinnamon extract that helps the body use insulin more effectively. Cinnulin PF is a particularly safe and highly effective form,standardized for type-A polymers which have been shown in clinical research to mimic insulin and reduce fasting blood sugar in 83% of subjects. It also lowers body fat, enhances lean body mass, lowers systolic blood pressure and brings improvements in various antioxidant measures. Cinnamon slows the rate of stomach emptying after meals by 34-37% in studies, which then slows the entry of glucose into the blood. Cinnamon stimulates insulin receptors and prevents those receptors from being inactivated, enhancing glucose transport into cells. Even small doses of cinnamon have been found in a US Agricultural Research Service report to lower blood glucose in type 2 diabetics by 20%, and to also cut cholesterol and triglyceride levels. Other research found that cinnamon helps skeletal muscle to absorb 17% more blood sugar per minute, likely by improving insulin-signaling. Cinnamon can help normalize blood sugar levels even in the presence of a high-carbohydrate diet. For people with type 2 diabetes, cinnamon reduces blood fats: triglycerides by 23-30%, bad LDL cholesterol by 7-27%, and total cholesterol by 12-26%.

Banaba is a medicinal tree originally from India, Southeast Asia, and the Philippines, its leaves are traditionally used for blood sugar control. The leaf and its active constituent corosolic acid, work in a similar way to insulin, increasing glucose transport from the blood into body cells. Human and cell culture studies have verified that banaba stimulates glucose uptake by cells, and can lower blood sugar within sixty minutes. The average human response is a 10-15% decrease in blood sugar within two hours of taking banaba. Clinical research shows that type 2 diabetes patients who took banaba extract standardized to 1% corosolic acid for two weeks had 10% lower blood glucose levels than patients taking placebo. Over longer periods, blood insulin, triglycerides, and hemoglobin (HbA1c) were reduced, and glucose fluctuations evened out. Banaba and its corosolic acid have been found in studies to decrease glucose manufacture by liver cells, and tannins in banaba may stimulate insulin receptors so that they behave as if insulin is present. Metabolic syndrome can improve after 10 weeks of banaba treatment, with lower blood pressure, improved fat metabolism, and reduced inflammation. Banaba has been found to enhance weight loss of 2-4 lbs. per month, even without significant dietary change: it stabilizes the appetite-regulating hormone leptin and food cravings that often occur for overweight individuals with elevated blood sugar, as well as improving blood sugar control and insulin action. Banaba may also be promising for its powerful antioxidant properties, possible HIV treatment, and stimulating cancer-cell-killing enzymes in cervical cancer cells

Always take natural remedies under the supervision of your health care provider. Do not use 'Metabolic X' without the advice of your healthcare professional if you are also taking insulin or hypoglycemic drugs including but not limited to metformin, glimepiride (Amaryl), glyburide (DiaBeta), pioglitazone (Actos), rosiglitazone (Avandia), chlorpropamide (Diabinese) or tolbutamide. Banaba, gymnema, chromium or cinnulin can decrease blood sugar, and reduce the doses needed for insulin or medications. Monitor your blood sugar closely. The constituents in 'Metabolic X' may also reduce blood pressure, so track your blood pressure regularly and work closely with your physician if you take medications for high blood pressure such as hydrochlorothiazide, atenolol, losartan, verapamil, spironolactone, diltiazem (Cardizem), amlodipine (Norvasc), or natural remedies for blood pressure. Chromium is very safe, though there have been reports of increased vivid dreams. Do not use 'Metabolic X' during pregnancy or nursing unless under the guidance of your physician, blood sugar can naturally change significantly during pregnancy, and there is insufficient data about safety during pregnancy. 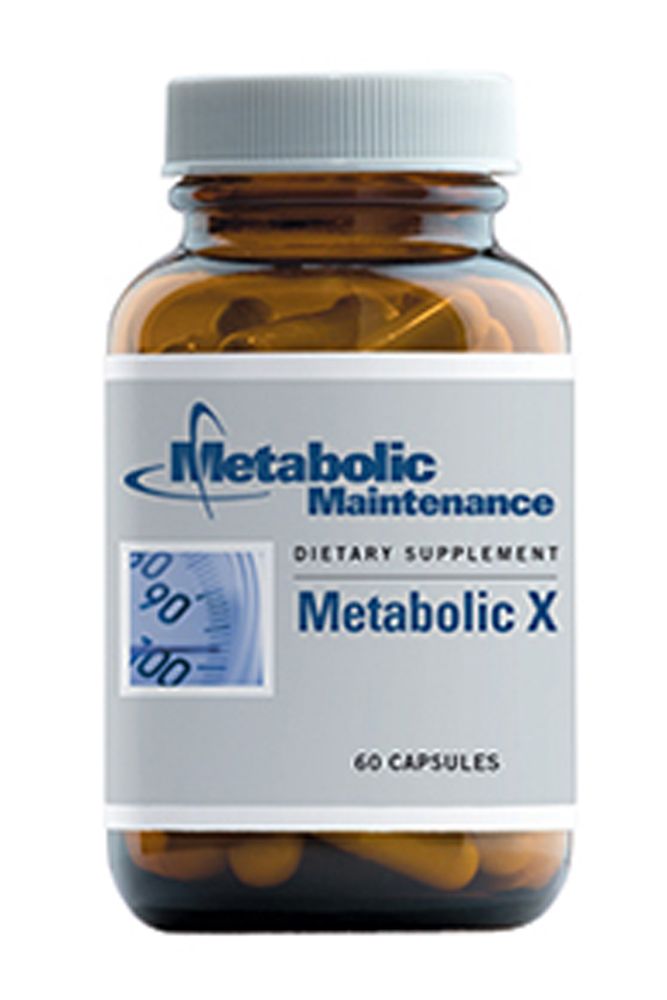 $32.00
Brand:
Thorne
Shipping:
Free shipping for purchases of $40 and over