MemoractivTM is a classic blend that contains highly potent doses of the most widely-studied nutrients and botanicals for brain and memory protection. Synergistic ingredients amplify each other, for example vinpocetine is more potent along with ginkgo. We particularly like the unusually high concentration of 240mg. of ginkgo, and binding it to phosphatidylserine gives greater cognitive support than the same dose of ginkgo alone, in research reports. Our patients have experienced excellent results from this blend for years for memory, learning, focus and mild depression. All the ingredients are synergistic: they enhance each other's benefits, and their cumulative effect is greater than taking just some of them in isolation. This formula from Thorne Research is in a vegan cellulose capsule and includes the amino-acid leucine for smooth, easy absorption.

L-carnitine (ALC) naturally occurs in the brain. It is made up of acetic acid bound to the amino acid carnitine, which carries long-chain fatty acids into the energy-producing mitochondria. ALC can mimic the major neurotransmitter acetylcholine which is essential for memory and optimal brain function. The body's acetylcholine declines with age and especially with Alzheimer's. Since the 1980s, acetyl-L-carnitine has shown outstanding results for Alzheimer's disease in well-controlled clinical trials: over the course of a year patients can improve in all scores of memory and cognitive function. Studies solidly show benefits for depression in elders, and impaired memory: 500mg. daily can help even mild memory loss, and enhance concentration, focus and objective thinking. Along with lipoic acid, ALC can bring biochemical markers of Alzheimer’s disease to near-normal levels. In research, it improved spatial memory, maybe via inhibition of tau-hyper-phosphorylation. ALC may also increase the number of nerve cells in growing brains, increase cellular ATP production, and prolong the healthy lifespan of neurons by boosting the brain's inherent growth factors that usually decline with age.

ALC is a powerful brain antioxidant that stabilizes cell membranes, and boosts energy production within cells. Oxygen free-radicals are a normal byproduct of the body's metabolism and energy production. Most of these oxygen radicals are safely contained within the membrane folds of mitochondria; but about two percent get free, generating toxins that endanger the entire cell. Antioxidants loan out extra molecules to stabilize oxygen free-radicals. Recent research shows that acetyl L-carnitine can protect nervous system proteins and fats from peroxidation, while at the same time enhancing the activity of other antioxidants.

Phosphatidylserine is a crucial brain phospholipid: it is found in the inner surface of neurons and maintains brain cell membraneintegrity and fluidity. It enhances cell-to-cell communication in the brain, and boosts neurotransmitters including acetylcholine, norepinephrine, serotonin, and dopamine. Phosphatidylserine also supports many vital enzymes, and quells inflammation that can injure brain cells. The brain manufactures phosphatidylserine, but this declines with age, which may lead to lower mental acuity and depression. It crosses the blood-brain barrier well when taken by mouth. In Europe and Japan, it is a prescription drug for memory and learning disabilities. Phosphatidylserine may be even more effective when combined with the omega-3 fatty acids.

Bacopa monnieri leaf extract is called brahmi in Ayurvedic medicine and has been traditionally used in India for thousands of years to enhance memory,improve comprehension and recollection, and to relieve pain. Studies with humans found evidence that bacopa improves cognition, and learning abilities, memory and speed of information processing in younger and older people. After six to twelve weeks, there is significant reduction in the rate of forgetting newly-learned information. Other research showed that bacopa could improve cognitive function in children, and decrease in anxiety symptoms in adults. Improvements continue to build for 3 or more months. The active constituents are saponins called bacosides. Bacopa may work by free radical scavenging, potent antioxidant effects, and by cholinergic modulation in the brain. Bacopa intake is linked to increases in the levels of antioxidants superoxide dismutase, catalase, and glutathione peroxidase in the prefrontal cortex, striatum, and hippocampus. Evidence shows that the effects on the cholinergic system include the modulation of acetylcholine release, choline acetylase activity, and muscarinic cholinergic receptor binding.

Ginkgo is both an antioxidant brain and nerve protector, and it also improves blood flow to the brain. It helps brain cells produce more energy, and enhances oxygen levels. Ginkgo's benefits are magnified when bound to phosphatidylserine.

Many clinical trials have found that ginkgo can bring statistically significant improvement for conditions due to poor blood flow or cerebral vascular insufficiency, including short-term memory loss, vertigo, depression, poor concentration, confusion, absent-mindedness, decreased physical performance, fatigue and anxiety. For early Alzheimer's disease and dementia, ginkgo may delay or even reverse neurological losses, and improve alertness, cognition and mood. Ginkgo starts taking effect after about twelve weeks and its benefits build up over time: in several big studies with patients taking ginkgo for one year, up to 64% of Alzheimer's patients had notable improvements in mental acuity. Scientific literature indicates that ginkgo may be as helpful as acetyl-cholinesterase inhibitor drugs such as Aricept® for Alzheimer's dementia.

Ginkgo may work by reducing age-related loss of adrenergic and cholinergic receptors, by increasing serotonin levels, and by boosting serum levels of acetylcholine and norepinephrine. Ginkgo appears to be particularly protective for the hippocampus, an area that can be most affected by Alzheimer's. Ginkgo may also benefit dementia by reducing insulin resistance, balancing brain sugar levels, and improving mitochondrial function.

Ginkgo helps protect the nervous system from injury due to atherosclerosis and clogged arteries that decrease blood flow to the brain, or due to many tiny clots or strokes over time which gradually deprive brain tissue of oxygen.It enhances blood flow velocity in the middle cerebral artery and the anterior cerebral artery, both major sources for brain nutrients. The function of the endothelium, artery lining, and levels of nitric oxide which helps open blood vessels, also improve. Ginkgo can decrease the stiffness of red blood cells, and reduce plasma viscosity and fibrinogen, cutting the risk of blood clots in the brain.

Always take natural remedies under the supervision of your health care provider. Do not use acetyl-L-carnitine without the advice of your healthcare professional if you take anticoagulant drugs such as Sintrom or warfarin, as acetyl-L-carnitine can prolong clotting times. Stop Memoractiv' at least seven days before surgery and for seven to ten days after, because of the possible blood-thinning actions of acetyl-L-carnitine and ginkgo. Use Memoractiv' with caution if you also take garlic, ginger, fish oil or ginkgo, all of which may also reduce blood clotting. Only use phosphatidylserine with the approval of your healthcare professional if you also take medication for Alzheimer's or anticholinergic drugs as these can all increase acetylcholine. Do not use ginkgo or Memoractiv' without the advice of your healthcare provider if you take antiplatelet drugs such as Plavix. Do not use during pregnancy or nursing unless under the guidance of your physician, there is insufficient data about safety during pregnancy. 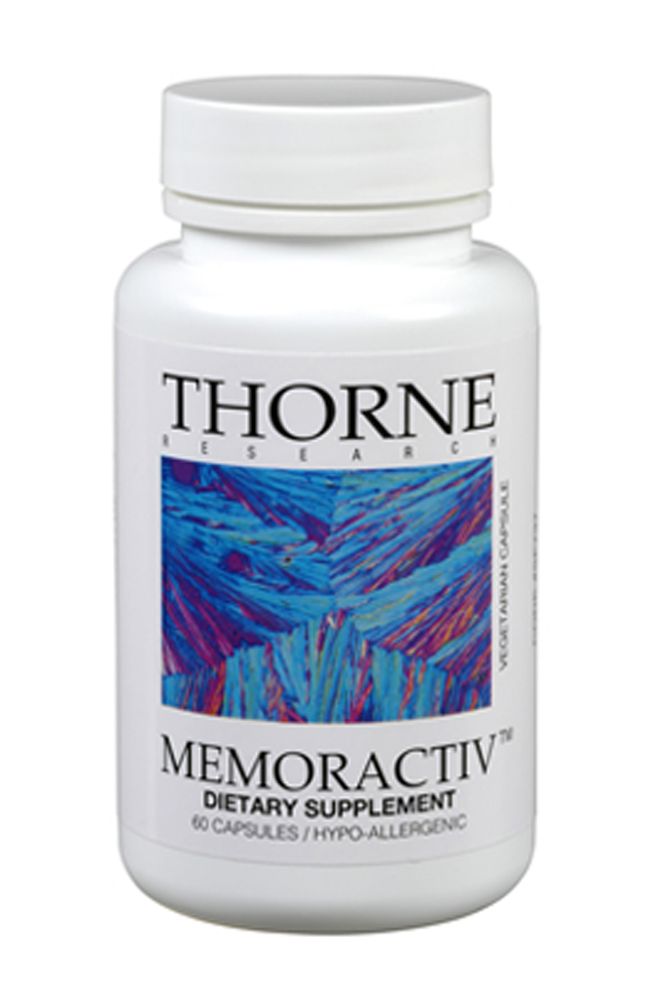 $70.00
Brand:
Thorne
Shipping:
Free shipping for purchases of $40 and over