This extract meets the gold standard for ginkgo leaf extract, containing 24% flavone glycosides with 6% terpene lactones (ginkgolides and bilobalides). It also provides a carefully measured balance of the bioflavonoids quercetin, kaempferol and isorhamnetin. These are powerful antioxidants that also prevent platelets from sticking together, to make ginkgo an effective circulation tonic that enhances healthy blood flow, a preventive against atherosclerosis, and a brain protector. The combination of a high-potency standardized extracts along with whole ginkgo leaf and numerous supportive compounds in Ginkgo Extract Plus gives the broadest spectrum of beneficial actions. It requires only two capsules daily, which provide an ample 160mg. of extract. In our clinic, we have observed Ginkgo Extract Plus to consistently be more effective over long term use than 24% glycosides alone.

Ginkgo biloba is a deciduous tree that appeared on earth over 200 million years ago; each tree can live up to one thousand years. Ginkgo was first used medicinally in China around 2,800 B.C. as a brain tonic. It is now known to be an antioxidant that protects brain and nerve cells from oxidative damage, and it enhances energy production within the brain even if the oxygen supply is lowered. Ginkgo strengthens blood vessels, improves their muscle tone, and helps them open up to increase blood flow to the brain, nerves and organs. It also discourages platelets from clumping, reducing the risk of stroke and atherosclerosis.

All these actions contribute to the clinical value of ginkgo: For cerebral vascular insufficiency ginkgo brought statistically significant improvements in short-term memory, vertigo and headache in studies. Ginkgo appears to be effective in slowing the early stages of Alzheimer's disease and improving mental acuity and attention after six months of use. Several studies have shown that ginkgo can ease depression, with scores on the Hamilton Depression Scale dropping from 14 to 4.5 on average. We have seen excellent results with ginkgo for tinnitus, taken along with R-lipoic acid: research suggests that tinnitus responds best if ginkgo is started soon after its onset. Vertigo also responds well to ginkgo especially when its cause is diminished blood supply. For eye health, ginkgo improved long-distance visual acuity for diabetic retinopathy and age-related macular degeneration in controlled trials, and it may be valuable for glaucoma. Because the retina is nerve tissue derived directly from the brain, ginkgo is effective for improving blood flow and protecting retinal tissue against free radical damage, addressing the underlying causes.

Ginkgo's ability to enhance blood flow to the limbs and extremities makes it a valuable remedy for peripheral vascular disease, claudication, Raynaud's phenomenon, and erectile dysfunction. Studies have shown ginkgo improved penile blood supply by ultrasound within weeks, and half the men regained potency after six months of ginkgo. For claudication, people taking ginkgo had much longer pain-free walking distances, and scans showed significantly better blood flow through the affected limbs. Ginkgo may have a role in migraine prevention, because it stabilizes brain circulation.

Always take natural remedies under the supervision of your health care provider. Consult your healthcare professional before using ginkgo if you are taking anti-platelet drugs or blood thinners as ginkgo can increase clotting times. Stop ginkgo at least seven days before and seven days after surgery. Do not use if you have a bleeding disorder or history of brain hemorrhage. If you are pregnant or nursing only use ginkgo under the guidance of your physician. 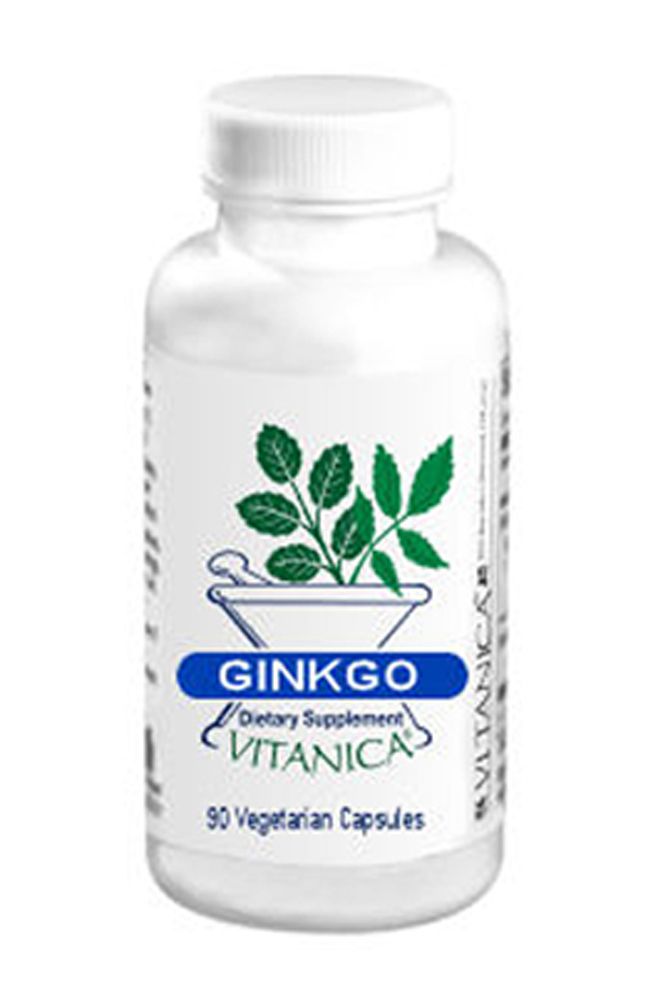 $14.00
Brand:
Vitanica
Shipping:
Free shipping for purchases of $40 and over